This weekend, Funky Junk Donna’s link party theme is Pet Parade, in honor of her beloved kitty Teddy, who passed on to greener fields this week. I’ve featured my Chloe before, when we honored Donna’s kitty Beethoven, here, but I’ll never run out of pictures of her, so I’m joining the homage party again.
So Sweet Girl Teddy, this one’s for you……
I bought this green basket a couple years ago, with every intention of selling it on Etsy. I cleaned it up, set up the backdrop for taking pictures, and in the time I walked away and came back to start shooting, Chloe had crawled in and staked her claim on it. Well, needless to say, what H.R.H. wants, she gets……..
She fit in it so perfectly, it was as if it was made for her, so far be it from me to take it away from her. I set it on the desk, next to the window, so she can stay perched in it when she surveys the wildlife outside. Then when the action stops, she just curls up and sleeps. Purrrfect…..
When she looks so damn cute in it, we are both rewarded. She reclines to her heart’s content, and I get to witness her serenity while I’m on the computer.
I value every moment with her, and never ever take it for granted…..

I loves my Chloe.
Linking To:

Just Because It's Small Doesn't Mean It's Easier To Paint: Episode IV

This week while treasure-hunting, I found an expandable peg rack. Though these tend to be dime-a-dozen, I happily brought this one home, because……… Look at those curves. Not to mention the fact that this one’s much beefier than most. The tallest pieces are 18” long, and they’re all almost 1-1/2” wide! They remind me of turned chair legs. It was the shapeliness and size that prompted me to think “chalk paint!” And look at her now…….. Although I’ve seen these racks painted, I never see them chalk-painted in 4 colors. Yep, I couldn’t resist. Red, Marigold, Apple Green, and Aqua. And employed my new favorite haphazard way to apply the paint, just like the spice cupboard. I must admit that when I first looked at this piece, I was thinking how quick it would be to paint. Well, there may be less surface, but sooo many crevices and curves. But in the end, after lots of distressing and waxing, I adore this one. I don’t know if I can ever go back to just one or two colors. I might get bored…..
Posted by Maria (Magia Mia) at 4/14/2013 6 comments:

What do Bon Bons, Nuts, and Cordials have in Common?

You'll see in a second..... Now that the weather’s starting to sort of look like Spring, here in Oregon, I’ve started rummaging around in the shed to see what rusty junk I’ve got to play with. When you’ve created as many things as I have in the last 20 years, it’s easy to forget what you’ve accumulated.... I stumbled upon this quirky little gem I made several years ago…… Whadaya think? This wind chime is made from vintage things I had lying around……
A frilly pierced brass Bon Bon dish, chrome cordial glasses with pretty gold interior, and mini silverplate nut dishes. I connected everything with random jewelry chain I had stashed for crafting. I used to display the cordials with tea lights inside, but I really appreciated how they rang when they were clinked together.
So what better than a windchime! It worked out nicely that the cordial stems were hollow, because then I had a tiny hole underneath to twist in eye screws. That gave me something to attach the chains to. The little silverplate dishes had some corrosion, so were unsuitable for food, but I thought they still had crafty value. So I poked a tiny hole into the edge of each one, then hung them from chain. I used some thin wire to connect the chain to the dishes. The filigree bon bon dish certainly made it convenient to hang anything, with all the available openings. To hang the dish, I cut a piece of chain to fit around the pedestal. Then with 3 equal pieces of chain, I attached them to the pedestal chain, making sure their connections were equidistant from each other. I then joined them to each other at the top. You could also connect them with wire or metal loop, etc, depending on how and where you hang it. Isn’t it just so dang fun to construct something from found objects?
If you stare at something long enough, you can come up with all sorts of creations……. Linking To:
Posted by Maria (Magia Mia) at 4/12/2013 2 comments:

In my post yesterday, I showed three mini moss gardens in different boxes.
With the silverplate jewelry boxes, mainly the larger one, I’ve had it earmarked as a display box ever since I brought it home. The lid’s hinge had broken off, so no one wanted it, but it had such beautiful detailing, that I just had to make it work. Displaying the lids upright just couldn’t be simpler. I had some galvanized sheeting, the kind you can buy in small pieces at the big box stores. They have different thicknesses, and I had some sturdy enough for this project, but thin enough to use tin snips on. I cut a piece in a height that measured the distance from the inside bottom of the jewelry box, to the top of the lid when propped on top of the box. (You could cut the sheet to be the exact inside width of the lid, but I just used what I had on hand.)
Once the pieces were cut, I stood them against the inside back of the boxes.
Okay, so call me silly, but for a short period of time I was feeding my kitty Fancy Feast. I really liked the small size of the cans, and also the fact that they had a gold finish. I rinsed them out and saved them, thinking that surely some day I would find a good crafty use for them. That day finally arrived.
They fit perfectly inside the jewelry boxes as mini planters for my ferns. Obviously the ferns will grow up, but until that day, they’re staying put in the jewelry box. My main reason for containing the fern in the little can is that I didn’t want to add soil to the entire box.
Since the sheet of moss had some soil attached to it from scooping it from the ground, I filled up the rest of the box with pea gravel to lay the moss on top of. I used pea gravel because A) it has enough weight to hold the metal sheeting in place, and B) I already had some on hand.
The smaller box didn’t need a plant can, since I only added a votive to the moss, but if later I want to add a plant, I will only have to remove the gravel from the can, and keep it in place.
Once the filling was done, I added a little Perlite (you can get at HD or Lowes) in the can to mix with soil before planting the fern. It improves drainage and aeration. Not much soil to worry about that here, but it's also infused with plant food, so why not I say.
Now the moss is laid in. If you add tealights, you can nestle them into gravel first, then fit the moss around it. There’s no real order here, just make everything fit.
The last part of the assembly is propping the lids. I have this insulation putty that’s actually called cord weatherstrip, because you can tear thin cords of it off
I pulled off a couple pieces and squished them against the top edge of the metal sheets, facing towards the front of the planters.
Then I placed the box lids over the sheets, pushing the puttied sheet’s edge into the lid. If the sheet metal finish isn't your cup of tea, you can always apply silver leaf to dress it up.
Because the sheet metal is fairly pliable, you can bend it a hint backwards, just to insure the lid doesn’t fall forward. (If you wanted to make the propped lids more permanent, you could always use a metal bonding adhesive to connect the lid to the sheet metal. I, however, like to rework my designs so often, that I rarely make anything permanent.) I obviously have commitment issues.....:) My next post will have a brief step-by-step of my cigar box moss garden.....
Till then....
Posted by Maria (Magia Mia) at 4/07/2013 1 comment:

I'm a little late to Funky Junk Donna's weekend linky party, but as a diehard, native Oregonian, I felt the need to represent something equally as native... moss.


I'm fortunate enough to be able to go backyard and scoop up an abundance of the divine Verde for my creative pleasure. So without further ado, here are some fun mini moss gardens I put together using silverplate jewelry boxes and a cool old German cigar box......
(This is my first attempt at phone blogging, so my apologies in advance if it looks wonky.....)

Every time I finish a chalk-painted piece,
I always say it's my new favorite, and this time is no exception.

I never paint the same way twice either.
Something in the process is always different.

The better the bones of a piece, the more inspired I am to create a paint design. 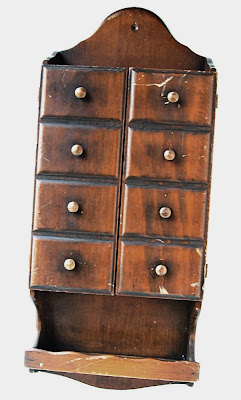 This hanging spice cupboard had so many design possibilities,
but rather than section out the colors,
I ultimately chose to layer 6 colors over the entire exterior.
Yes, I said 6 layers...... 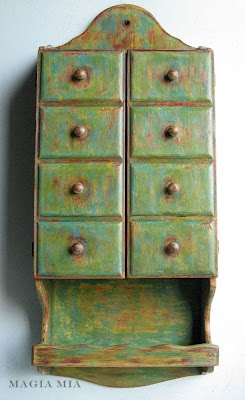 The first thing that intrigued me about this piece
was the faux apothecary drawer appearance.
We vintage fanatics seem to just have a thing for cubbies,
even when they're not real. 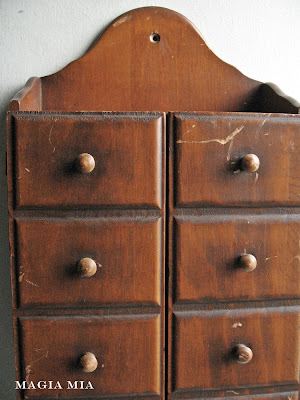 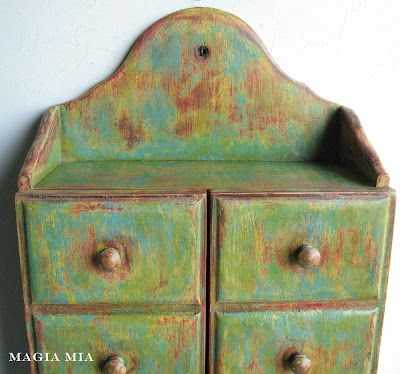 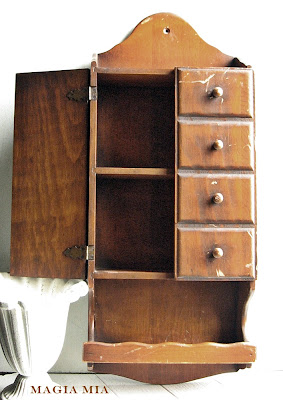 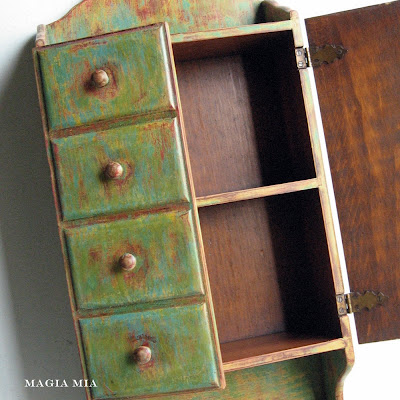 After drooling over a slew of antique spice and
apothecary cupboards, I felt it would look more
rustic if I left the inside unpainted.
It didn't hurt that the finish inside looked good.
I especially liked the grain in the doors,
and I just didn't have the heart to paint them. 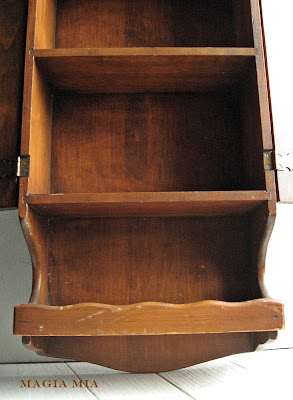 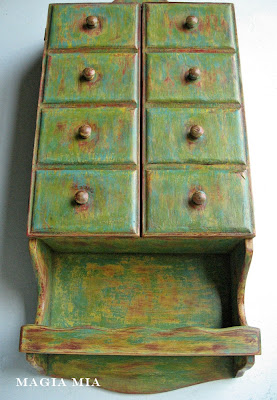 As I said, I never paint the same way twice.
What I did differently was how I painted each layer.
While I normally paint each layer perfect and even,
this time I dry-brushed each color, leaving open space
between the brush strokes. 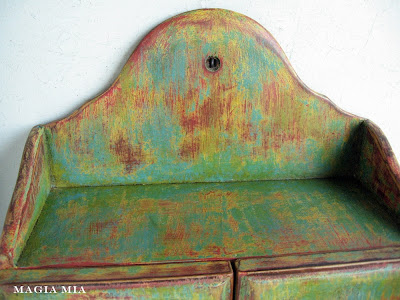 I also painted each coat haphazardly in different directions.
Once the sanding began, what resulted was a really
cool, flaky, and worn appearance. Much more than
I've accomplished before. The imperfect painting allowed
my sanding to reveal each layer much quicker and easier,
and the random directions look awesome. 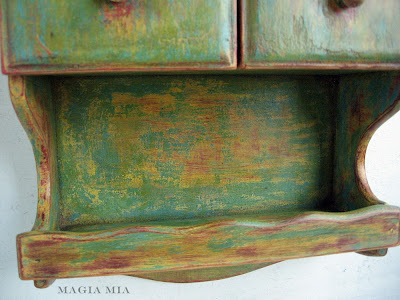 The layer order was Red, soft Marigold, crisp Yellow,
a leafy green, dark Turquoise, then a mossy green.
And of course, clear and dark wax. 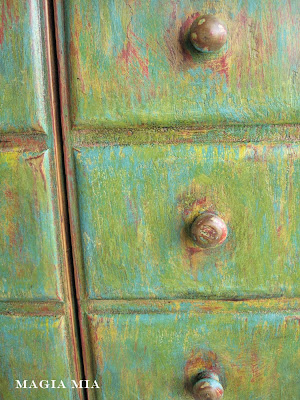 I am thrilled with the colors and distressing
on this project, but it can't be said enough.....
Save yourself a lot of time on color-mixing,
and just buy Annie Sloan's chalk paint.
The only reason I didn't this time is that
my budget wouldn't allow it. Otherwise,
I'd probably own the majority of her colors.
Emperor Silk, Antibes Green, Florence, Arles, and English Yellow
would have been very useful on this project.
Not identical, but the same feel. 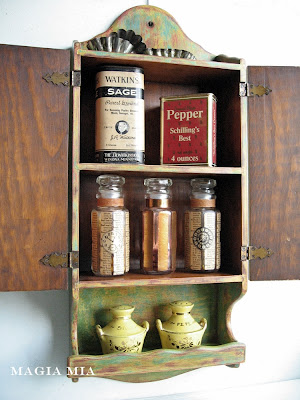 This colorful cupboard is more than welcome in my world,
but it's probably too intense for those with color phobia .....
Posted by Maria (Magia Mia) at 4/01/2013 7 comments: